Rebecca Lobo looked up after crossing the stage at the 2017 Naismith Memorial Basketball Hall of Fame Enshrinement press conference in Springfield, Mass. yesterday. She and ten others are the most recent pictures added to the dome of the building.

“During the press conference I was kinda looking around at all the faces and I didn’t realize that ours were up there,” said Lobo yesterday after receiving her hall of fame jacket.  She continued, “it’s the first time I saw it which was [pauses] just ridiculously cool and I think it’s kinda hitting home, the significance of it.”

Lobo grew up a short ride away in Southwick Mass. and often visited the Naismith Memorial Hall of Fame as a child. After a successful high school basketball career where she set a state scoring record, it was time to select a college.  Her parents RuthAnn and Dennis Lobo, educators by profession, had one very clear message to their daughter: anywhere but UConn.

Her parents were concerned the University of Connecticut would not be as academically challenging as Lobo’s other choices. However, Lobo knew what she wanted, what she needed to do. “It’s the first time in my life that I went kind of against their wishes … I just followed my heart and knew that’s where I needed to be. My parents quickly came to believe it was one of the best decisions I ever made and the best decision I ever made in regards to my basketball career, without question.”

Deciding to play for coach Geno Auriemma would set off key moments in Lobo’s career, and the beginning of women’s basketball in America as we know it.

Geno Auriemma and Chris Dailey (aka C.D) are known to get the best from their players, and often that comes with the harsh reality that whatever they were in high school is just not good enough. The tough love culture at UConn is well documented as part of the package. Players today enter with the full expectation of adding to the programs 21 conference titles and 11 national titles. It’s just a matter of how many.

For Lobo, the tough love was there without the assumption of success.  When Lobo set foot into the gym at the University of Connecticut, there were no undefeated seasons. There were no national championship trophies. However, she did have Auriemma and C.D.

“Did I ever yell at her? Her first two years I did nothing but yell at her because I didn’t think she really had an edge,” coach Auriemma told Ron Chimelis for the Class of 2017 Enshrinement program.

Chimelis recounts Lobo’s doubts about her decision to attend UConn. Lobo talked about her desire to transfer and hoped to get some support from her mother.  RuthAnn gave it to her straight, “This is not my issue or my problem. You’re either going to transfer, or you’re going to talk to him,” Lobo recalls her mother saying. 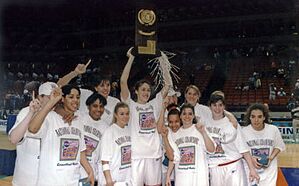 She chose the latter. It took time, and more criticism, but nevertheless, she persisted. As a result, Lobo and the 1995 Huskies became the first undefeated team in program history en route to UConn’s first NCAA title. The rest, as they say, is history.

The success of the program has not changed Auriemma’s and C.D’s approach, and perhaps that is the reason for the continued success. “What [Geno] demands from his team hasn’t changed. The accountability that coach Dailey makes you have off the court and what you represent hasn’t changed,” Lobo told The Summitt.

The start of something special

Her title at UConn was one of many pioneer moments for the women’s game in the next four years. In 1996, Lobo would be one of twelve women to represent the United States on the Olympic team. The Atlanta Games were a re-introduction of sorts for players like Theresa Edwards, Ruthie Bolton, and Katrina McClain. Once these women graduated from college, there were no professional leagues in the country to embrace them.  Therefore, the women completed abroad and for USA Basketball with little recognition.

Despite being a role player for Team USA, she was the most recognizable face to fans. It was something that made Lobo, and perhaps a few veteran teammates, uneasy.  However, she embraced her role on and off the court with humility.  At her mother’s advice, Lobo always remained until every autograph was signed and always looked her fans in the eye.

If it took Lobo to be the draw and others to be the go-to talent on the court, so be it. “What I did know was that even if kids were coming to see me, they would also get to see Teresa Edwards play. They would get to see Katrina McClain, one of the best post players in the history of the game. I welcomed that,” Lobo told Chimelis for the occasion.

The 1996 team won a gold medal on home soil, catapulting the women and the women’s game into American sports culture. The time seemed ripe for American women to play basketball closer to home and the NBA agreed.

The WNBA was founded by the NBA on the heels of the Atlanta Games. It was not the first women’s league in the America, but it was the only one with the support of its brother organization. Looking to capitalize on the success of the UConn 35-0 season in ’95 and the ’96 Olympics, the American Basketball League (ABL) tipped off in the fall of 1996.  The following summer, the WNBA held its first game. Olympic teammates Lisa Leslie, Sheryl Swoopes and Rebecca Lobo would become the faces of the latter.

“I heard a lot more about the ABL before I ever heard anything about the WNBA,” Lobo told The Summitt.  “I remember just thinking, for a league to be successful in this country it has to have the backing of the NBA. It has to have (NBA Commissioner) David Stern. It has to have NBA owners and their resources behind it.”

She was right.  The ABL never got through three seasons, while the WNBA has continued to grow through today, its 21st season.

The future of the game

She is proud to make a living covering women’s basketball exclusively, something one could not do 20 years ago. As she did on the court, Lobo is now part of a team of broadcasters sharing the game with fans all over the world.

“I’m lucky that I get to do a job that I absolutely love. A job that you couldn’t make a living at 21 years ago,” Lobo shared yesterday. “There weren’t enough women’s basketball games on TV 21 years ago to be able to do that as your only job. So, I’m fortunate that it exists. I’m fortunate that the people at ESPN like what I say. It’s a blast.”

She has seen great growth in the game since her playing days, “I don’t think I thought when the league first started that the level of play would be where it is now. It’s great basketball,” Lobo told The Summitt.

Lobo is also surprised people often go out of their way to bash the league. “I think one other thing that might have surprised me, or does surprise me is still how some people take joy in kinda trashing it instead of just ignoring it.” However, Lobo wants the league to rise above the negative and focus on what is working for the league. Lobo knows there is plenty more growth in store for women’s basketball coverage, “I’d like to see it covered more,” said Lobo. That’s why some of the new media approaches taken by the WNBA are exciting to her.

This can only bode well for the league. While Lobo was once the main draw for an entire league, players today can grow their fan base while they play domestically and abroad. “The league used to see these women playing overseas as a bad thing,” commented Lobo.

“Now they realize, it could be a great thing because globalizing the women’s game. They’re going overseas and fans in Turkey are now tuning into WNBA games. They loved watching whoever the players were representing their team. So, I think what Lisa’s done, what the WNBA has done is great.

“I still think people’s number one place to watch the game is ESPN2,” added Lobo with a smile, “but I think it’s great.”

Today, she enters the Naismith Memorial Hall of Fame as a “contributor” to the women’s game and couldn’t be more excited.

What’s in a name?

Contributors are often executives like 2017 honoree Jerry Krause, general manager and executive vice president of the Chicago Bulls (1985-2003), or owners like 2017 honoree Mannie Jackson, who served as the Harlem Globetrotters CEO (1993-2007).  However, Lobo is the perfect exception.

Her impact at every milestone of the modern women’s game in the United States is exceptional. Sure, the game was played beautifully before Lobo, and she will be the first to give kudos to the players of today. However, whether she wanted it or not, her friendly girl-next-door demeanor – the same one Geno Auriemma wanted nothing to do with on the court – made the game accessible to fans of all ages and genders.

“I was never somebody who thought, ‘I can’t wait to see my name on a jersey’”, said Lobo yesterday.  “I loved being part of this thing that I understood was going to represent so much for us as players and also for any future generations.”

Later this evening, Lobo will be enshrined into the Hall of Fame she once visited as a child, and the place she married her husband Steve Rushin. The couple celebrates another life event tonight when Lobo is greeting into the Hall as arguably one of the most popular and impactful pioneers of women’s basketball.

RuthAnn Lobo, unfortunately, died of breast cancer in 2011 before her daughter got her call to the Hall. However, there is still much to celebrate as Lobo’s father, husband and four children will be joined by her UConn, WNBA and ESPN family to celebrate her induction.

“I’m so proud … and so thankful that I’ve had this opportunity,” reflected Lobo. “I’m just hoping that people who have been with me on this journey from the time I was at Southwick all the way through now can take pride in it.”